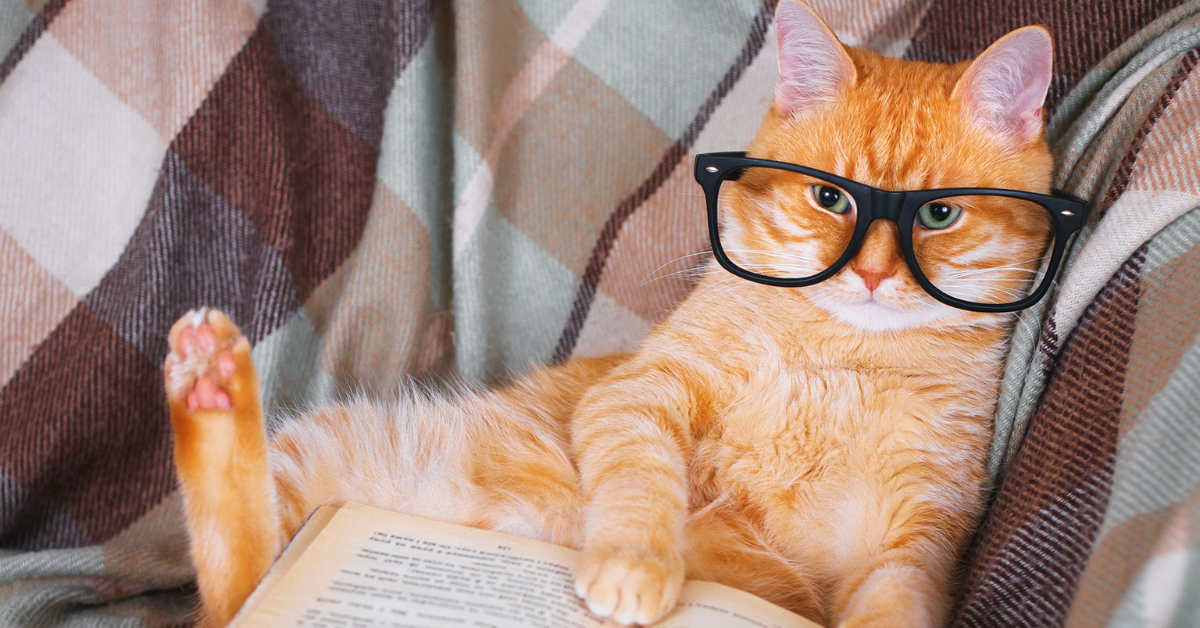 Discover this set of interesting facts about Cat Intelligence. . .

Cat intelligence is often defined as the capacity of domesticated cats to solve problems and adapt to their environment and many factors impact the level of cat intelligence.  Humans that have raised cats often marvel at their Cat’s antics and stunts around the house.  Cats are one animal that just naturally looks wise.  Here we take a look at interesting facts about the intelligence of cats.

#2) Cats have a relatively small brain and similar brain structure as humans – the average cat brain size is only about five centimeters or two inches long and weighs between 0.9 to 1.1 ounces.  This is about the size of a human pinkie finger.  Their brain  occupies about 0.9 percent of their body mass.  However, it is surface folding and brain structure that are most important in assessing intelligence (not brain size). The feline brain’s structure and surface folding is 90 percent similar to that of humans.  When it comes to intelligence, size matters a whole lot less than other factors.

#3) Cats have a proportionally larger cerebellum – which makes sense since body awareness, balance, and coordination are key for their day-to-day needs like jumping, hunting, climbing, and stalking prey.  The cerebellum is key for balance and regulating movement.

#4) Cats excel at procedural memory – like humans, cats learn by observation and doing. Examples include opening doors, ringing bells, and turning on light switches. Cats excel at this form of procedural memory.  Research has shown that these memories last 10 years or more. Cats associate the memory of an event or place with the emotions they experienced in the surroundings or locations. For example, cats will remember experiencing traumatic stress, pain or fear in the veterinarian’s exam room. They also remember positive experiences (especially when food or play is involved).  If your cat watches you open the cabinet enough times, they will often learn to open cabinets and drawers all by themselves.  Kittens learn by watching their mothers hunt, eat, and groom.  This form of learning continues as they evolve into adult cats.

#6 Cats recognize their human’s voice – researchers played cats recordings of either their pet parents or strangers calling their name. The cats were most responsive to the voices of their pet parents. But rather than meowing or getting up to find them, they just moved their head or ears around (2013 study published by Animal Cognition).

#7) Cats bond with their Humans – Research published in Current Biology support that cats can actually bond with their human parents after all.  When kittens and cats were separated from their pet parents and then reunited with them, they displayed “distinct attachment styles toward human caregivers.” Many were more relaxed and willing to explore the room when their loved one was nearby.  These behaviors indicates a sense of attachment to their human and makes them feel secure.  Both cats and kittens showed about the same level of attachment to caregivers as children and dogs did.

#8) Cats dream – If you’ve watched your cat’s paws twitch as she snoozes, you’ve probably lovingly imagined her dreaming of chasing mice or kneading dough. While it’s impossible to get into the dreaming mind of a cat, our feline friends do experience rapid eye movement sleep (a.k.a. REM sleep).  This is the same stage of sleep during which humans have dreams (source:  Journal of Sleep Research).  Like humans, cat eyes flutter while they dream.  Cats have complex dreams while sleeping and they are capable of retaining and recalling long sequences of events while they are asleep.  Like many other animals, a dreaming cat will often have rapid, uncontrolled facial, whisker, paw, and abdominal movements. #9) A Cat’s Brain Turns Their Predatory Behavior On At Dawn And Dusk – Cats are crepuscular (meaning they are most active during the hours surrounding dusk and dawn). These are prime hunting times for cats and is why cats wake you up at the same time each morning to be fed.

#10)  A Cat’s brain requires stimulation and bored cats cause trouble – As we have domesticated cats, many of their innate behaviors and cat intelligence tend to suffer in indoor environments. This can lead to cats turning their boredom into bad habits. It is important to provide cats with interactive play and plenty of stimulation in their environments.  A window perch that faces an outdoor bird feeder is perfect entertainment for a cat.

Cats have a superior ability to learn new information, expand existing information, recall prior learnings, and use that information in other situations. Their cognitive ability makes them highly intelligent.