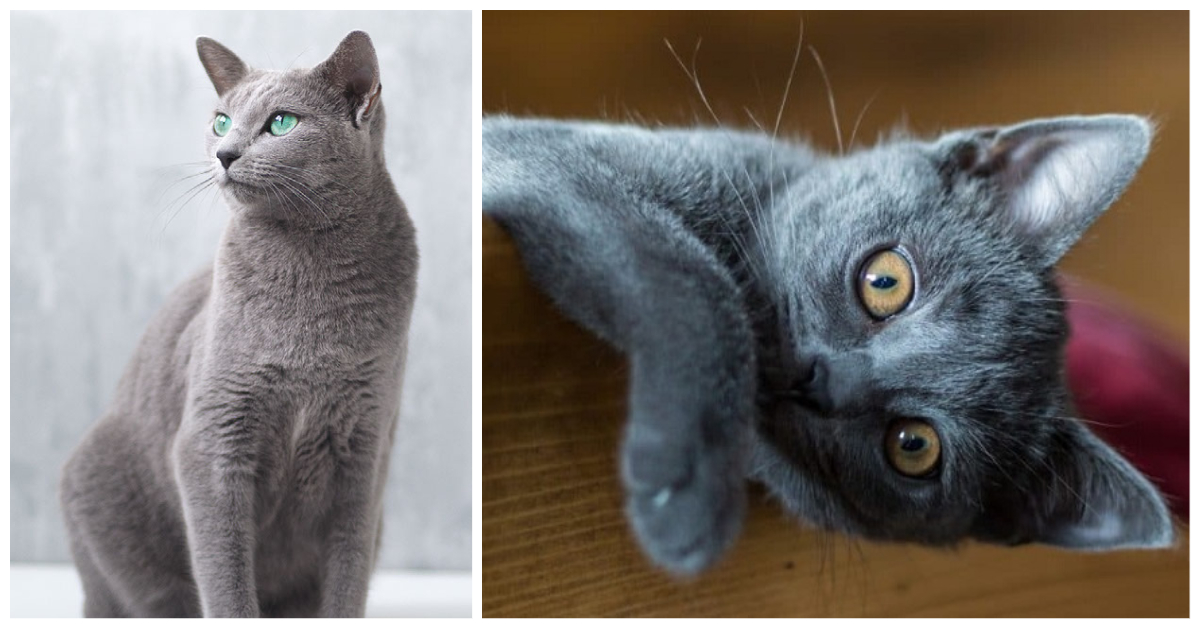 Here we take a look at the beauty of 5 different Grey Cat Breeds . . .

If you love Grey cats, then you should check out these five Grey Cat Breeds.  Grey is a common color in many cat breeds.  However, some cat breeds are uniquely grey only and in other cat breeds grey is a traditional color.

Watch the video to see the beautiful variety of Grey cats and kittens and see more details about each breed below.

With their blue-grey fur and vivid green eyes, these cats are very eye-catching. However, they are more than just their looks! Russian Blue cats make great pets because they’re very obedient and easy to train, and they very rarely have health problems. Raised as a “Royal” breed and believed to be good omens throughout folklore history, these cats are an iconic favorite of many cat lovers.  Russian Blues come only in this color.

British Shorthair Cats are known for their broad and round face and they are the pedigreed version of the traditional British domestic cat.  The breed has a distinctively stocky body and dense coat with the most familiar color variant as the “British Blue” (with a solid grey-blue coat, orange eyes, and a medium-sized tail).  The origin of this breed is believed to date back to the first century AD, making British Shorthairs one of the most ancient domestic cat  breeds in the World.  The Romans imported these cats to keep their camps clear of rodents and they were interbred with the local European wildcat population.  Over the centuries, they developed into large, robust cats with a short thick coat, to better withstand conditions on their native islands. Based on historical artists’ representations, the modern British Shorthair is unchanged from this initial type.  In the late 1800s, a determined cat breeder named Harrison Weir began developing the British shorthair officially by crossing different individual felines. At the first organized cat show, held at London’s Crystal Palace in 1871, a blue tabby British shorthair owned by Weir won Best in Show.

The Chartreux is a sturdy, shorthaired French breed.  This cat is know for its hunting prowess and its dense, water repellent fur. Chartreux are extremely supple and agile cats.  Since the Chartreux has been around for so many centuries, it’s hard to say with certainty just where and when it first developed. Their blue (silver-grey) water-resistant short hair double coats which are often slightly thick in texture and their orange- or copper-colored eyes are distinct traits of these beautiful cats. Chartreux cats are also known for their “smile”; due to the structure of their heads and their tapered muzzles, they often appear to be smiling.  Chartreaux cats come in only this distinct color.

In his home country of Thailand, the Korat is a living symbol of luck and prosperity. The Korat is one of the oldest, most stable breeds in the world.  Korats are known to be quieter than the Siamese (to whom they are related).  Their compact, muscular body wears a short, easy-care coat in bluish-gray tipped with silver is their only breed color.   Their eyes do not achieve their luminous green color until the Korat is 2 to 4 years old.  The Korat shines like silver and is distinguished by a heart-shaped head; huge, luminous eyes of peridot green or amber; large ears flared at the base, rounding at the tip and set high on the head; and a medium-length tail that tapers to a rounded tip.