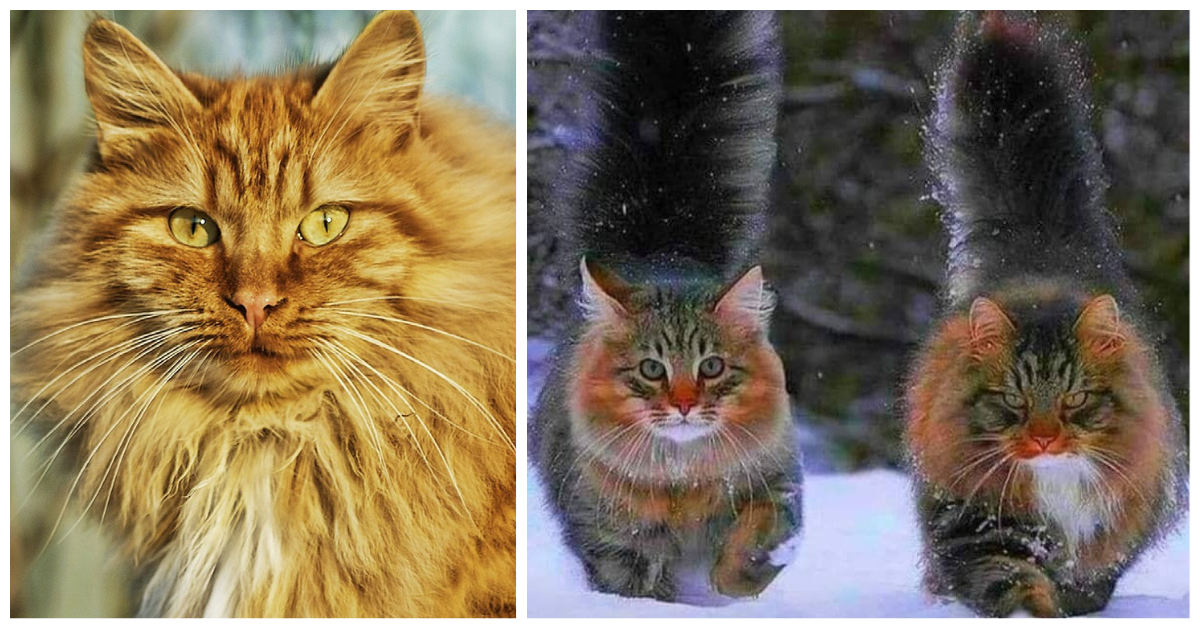 The Norwegian Forest Cat is also known as the cat of the Vikings although the exact origin of the breed is not known.   This cat breed is often referred to as “Wegie” as an abbreviation for “Norwegian”.

Watch the video to discover interesting facts about Norwegian Forest cats and see more details about this breed below.

Here is additional information and identification about Norwegian Forest cats and their breed profile and characteristics.

The exact origin of this cat breed is not known.  It is believed that most likely the ancestors of the Norwegian Forest cat served on Viking ships to control mice and rats.  The breed evolved in the Norwegian forests for many centuries, but were later prized for their hunting skills and were used on Norwegian farms.  They were discovered in the early twentieth century by cat enthusiasts and evolved into the breed we know today.

Norwegian Forest Cats originated in Northern Europe and are popular in Norway, Denmark, Sweden, Iceland and France.  The breed was adopted as the official cat of Norway that is deserving of their name.  In Norway, they are called skogkatt (which means “forest cat” in Norwegian). The breed is a relatively old breed and even has tales going back to the earliest ancestors in Norse mythology.
During World War II, the breed became nearly extinct like many other cat breeds.  Efforts by the Norwegian Forest Cat Club helped to restore the population of the breed by creating an official breeding program. The Norwegian Forest cat was registered as a breed with the European Fédération Internationale Féline in the 1970s.   Local cat fancier, Carl-Fredrik Nordane is credited with registration of the breed.  The breed is relatively new in the United States compared to the long history in Scandinavia. They were not exported from Norway until the late 1970s, and the first pair arrived in the United States in November of 1979.

There are a few related breeds to Norwegian Forest Cats with similar breed characteristics including the Maine Coon and Siberian Cat breeds that are sturdy cats built for colder climates.  Large, almond-shaped eyes with their oblique set and the equilateral triangle-shaped head contribute to the unique appearance of Norwegian Forest cats.

The Norwegian Forest cat is believed to be referenced in Norse Mythology.  The cat’s mythological ancestors may have included the giant cats that pulled the chariot of Norse goddess Freya. The cats were so large that not even mighty Thor could lift them.

Despite their hardy heritage, this breed is just great at being a homebody that enjoys the company of other pets and particularly their human companions.  They are considered friendly, intelligent, and generally good with people.  The Norwegian Forest cat has a lot of energy and are interactive cats who enjoy being part of their family environment and playing games.  Their temperament is considered sweet and gentle and they may be shy around strangers.  The personality traits of these cats are respected as intelligent and alert, and love human connection and affection.  This breed has positive qualities and characteristics for family interaction and are known to be good around kids.

Cat fanciers have noted that Norwegian Forest cats produce a variety of high-pitched “chirping” vocalizations.  The are not considered very vocal cats like the Siamese cat breed.

This breed is a sturdy cat with decent longevity for a domestic cat breed.  When properly cared for and fed a good diet that meets their nutritional needs, Norwegian forest cats can expect to live in the range of  14 to 16 years.  An exact average lifespan has not been compiled and thus is covered by a lifespan range.

Breeders typically make kittens available between twelve and sixteen weeks of age. After twelve weeks, litters have had their basic inoculations and developed the physical and social stability needed for a new environment and for transport.

Norwegian Forest cats are athletic, muscular cats with larger bodies than most domestic cat breeds.  This breed is often considered in the top 10 largest domestic cat breeds in the world.  The growth of Norwegian forest cats is relatively slow to mature taking around five years to reach full adulthood.  This breed my retain a kitten development stage nature for longer than many other cat breeds and they love to play.

The breed is classified as a semi-longhaired cat.  Their durable coat is adapted to a very cold climate, with a top coat of glossy, long, water-shedding hair and a woolly undercoat for insulation.  This double coat can be prone to matting and Norwegian Forest cats should have  a weekly brushing to keep the coat in good shape.

Norwegian Forest Cats come in most colors, from pure white to deepest coal black, with every possible coat pattern and color combination in between.  The breed standard does not include colorpoint colors as seen in the Siamese or Persian-Himalayan breeds ( such as seal point or chocolate point fur patterns).

Norwegian Forest cats are not considered hypoallergenic.  Their saliva contains lower levels of Fel d 1 (the protein that triggers human allergic reactions) than most cats.  However, Wegies can carry allergens in their semi-long coats, which can trigger human allergies and prevents the breed from being considered truly hypoallergenic.

The eye color of Norwegian Forest cat varies with fur color.  Their eyes may be shades of green, gold or copper and may be a combinations of colors.

The eating habits of Norwegian Forest Cats resemble most cat breeds.  The average cat prefers to eat about 10-15 times a day, just a few nibbles at a time if free free-feeding is available.  Boredom may increase the number of trips your cat makes to the food bowl making exercise and play time good for their health.

The grooming of Norwegian Forest cats is consistent with other semi long haired cats.  They should have their coat combed weekly with a stainless steel comb or slicker brush. They will typically shed one coat in the spring and one in the winter.  During shedding, their coat should be combed through two or three times a week.

The Norwegian Forest Cat has some noted health issues.  Kidney and heart diseases have been reported in the breed. Specifically in this breed, complex rearrangements of glycogen branching enzyme (GBE1) can cause a perinatal hypoglycaemic collapse and a late-juvenile-onset neuromuscular degeneration in glycogen storage disease type IV.

Remember to “share” this with other fans of the Norwegian Forest Cat breed.  Check out more interesting cat videos on our CatFancast YouTube channel.