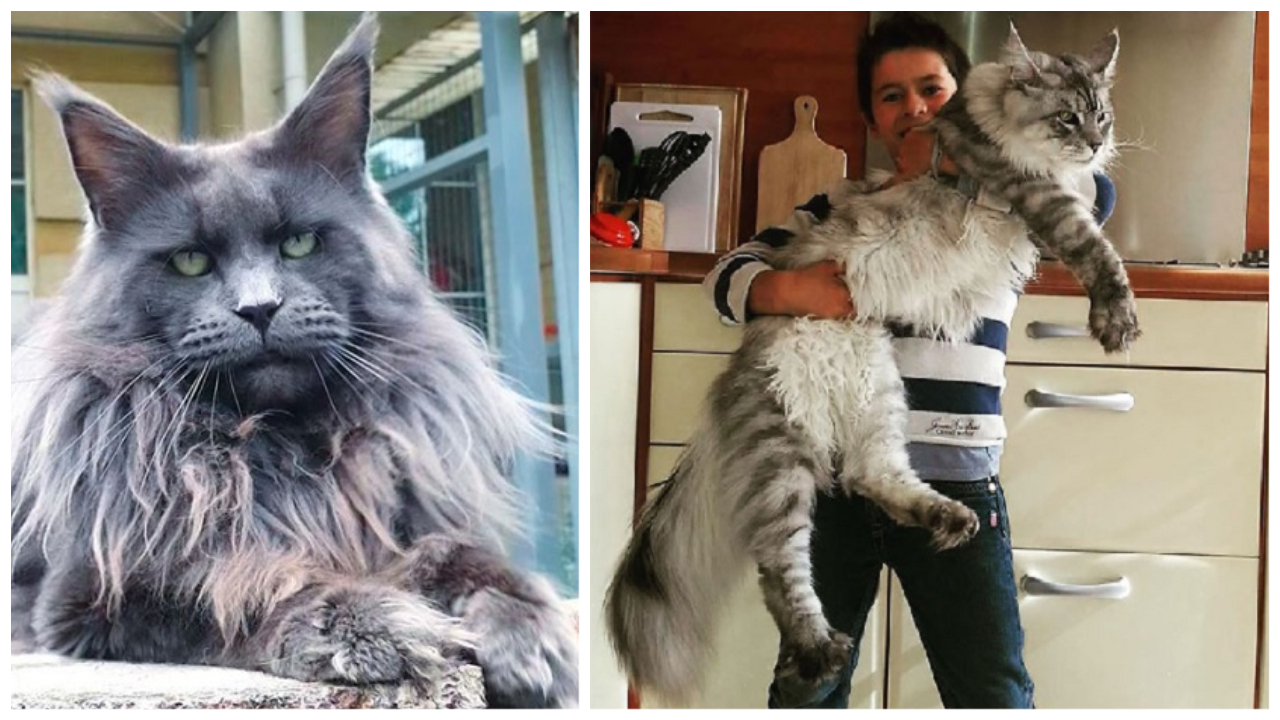 Here we take a look at the eight biggest domestic Cat Breeds considering both the tallest cats and the largest cats by typical weight range.

We have ranked the eight biggest domestic Cat Breeds for cat fans that love larger cats.  Watch the video to see our ranking of big kitty breeds and see more details below.

The video covers our ranking of the 8 Biggest Domestic Cat Breeds including:

Here are additional details for each biggest domestic cat breed.

Savannah Cats – this breed ranks #2 on our list and often holds the record for the World’s Tallest domestic cat.  The Savannah is a cross between an African Serval and a domestic cat that creates a tall, lanky cat from the Serval heritage.  Cats with higher mixes of Serval are the larger cats for this breed.  F1 Savannah cat size males are 17 to 25 pounds, and stand approximately 16 to 18 inches at the shoulder and 22 to 24 inches from chest to rump. F1 females are 13 to 19 pounds and often appear to weight more give their height and length.

Chausie Cats – this breed was developed by breeding a few individuals from the non-domestic species Jungle Cat (Felis chaus) to a far greater number of domestic cats (Felis silvestris catus). The Chausie was first recognized as a domestic breed by The International Cat Association (TICA) in 1995.  The Chausie is categorized as a non-domestic hybrid source breed.  By the fourth generation, Chausie cats are fully fertile and completely domestic in temperament.  Larger male Chausie cats can weight up to 25 pounds.

Siberian Cats – this breed is Russia’s native forest cat and first appeared in recorded history around the year 1000.  Siberians hails from the unforgiving climate of Siberia that provided their rugged fur coats fit for harsh and cold climates.  The Siberian breed is a strong and powerfully built cat, with strong hindquarters and large, well-rounded paws and an equally large full tail.   Larger fit males may weight up to 25 pounds.

Norwegian Forest Cats – this cat breed is also known as the cat of the Vikings although the exact origin of the breed is not known.  This cat breed is often referred to as “Wegie” as an abbreviation for “Norwegian”.   It is believed that most likely the ancestors of the Norwegian Forest cat served on Viking ships to control mice and rats.  The breed evolved in the Norwegian forests for many centuries, but were later prized for their hunting skills and were used on Norwegian farms.  They were discovered in the early twentieth century by cat enthusiasts and evolved into the breed we know today.  Males Norwegian Forest cats typically weigh between 12 and 16 pounds (5.4 – 7.2 Kilograms).   Larger males can weight up to 30 pounds (13,6 kilograms).  Females typically range from 9 to 12 pounds.

Birman Cats – this breed is also called the “Sacred Cat of Burma” and is a long-haired, colour-pointed cat distinguished by a silky coat, deep blue eyes, and contrasting white “gloves” on each paw.   Females Birmans weigh between 6 and 10 pounds and males average between 10 and 15 pounds.  Larger male Birmans may weigh up to 20 pounds.

British Shorthair Cats – this is the pedigreed version of the traditional British domestic cat, with a stocky body, dense coat, and broad face. The most familiar colour variant is the “British Blue”, with a solid grey-blue coat, orange eyes, and a medium-sized tail.  British Shorthairs now coming in a variety of colors and fur patterns.  Male British Shorthairs weigh between 9 and 17 pounds, while females tend to weigh between 7 and 12 pounds.  Larger fit males may weight up to 20 pounds.

Remember to “share” the 8 Biggest Domestic Cat Breeds with other cat fans!